Football Manager 2016, the latest version of the legendary football management game that began life as Championship Manager back in 1992,

For the ‘Champ Man’ generation the new releases probably won’t mean much. In bygone days you could get away with saying stuff like ‘I’ll just play out the remainder of the season’ when it’s already 3am.Not anymore. We’ve got relationships, we’ve got kids to look after, and we’ve got jobs to keep.

Nowadays Football Manager takes up roughly the same amount of time as managing an actual real life football club, perhaps more. We just don’t have the time, and consequently, most of us have retired from the game.

Remember when you could finish an entire season in one evening? The likes of Alfonso Perez and Ibrahim Bakayoko killing it in CM97/98, or Cherno Samba winning titles almost single-handedly in CM01/02?

OK, well it was a long time ago, to be fair.To help jog your memory, I’ve put together a legends XI from that wonderful 01/02 version.For purely research purposes, of course, I picked Man Utd as my team for ease of signing players.

Has to be 4-1-3-2. A formation suitable for any club and any division you happen to find yourself in. The perfect blend between attack and defense. Under team instructions I set the mentality to ‘Attacking’, the passing to ‘Short’, and the pressing to ‘No’. You couldn’t press the opposition in this version without your entire side getting too knackered to see out the season. 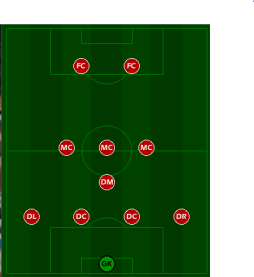 It was between Sebastien Frey and Dionisis Chiotis for the number one spot. Both great keepers but, as the Greek had a tendency to get sent off two or three times a season, I’ve opted for the more dependable Frenchman. No-brainer. Sign Micky Duff from Cheltenham for about 22k at the start of the game, and trust me, right back is sorted for the next 10 years. He gets up and down the pitch all day, rarely makes a mistake, and chips in with his fair share of goals and assists. As reliable as it gets. The choice came down to Arca, Grigoris Georgatos and Stelios Venetidis. All three were your archetypical modern attacking full-back. So you could say they were way ahead of their time seeing as this game is 14 years old! Georgatis was absolute quality going forward, but slightly suspect defensively and at 28 years old a bit of a stop-gap solution. Arca was the more difficult player to sign but he just edges out Venetidis for all-round quality. If Duff was a bit Gary Neville, Arca was more your Patrice Evra. Loved bombing forward and had a delightful left peg on him. n Champ it was imperative to have a left or either footed player as your left centre back. I doubt there is any empirical evidence to back this up – but it just felt right. I’d rather have started with 10 men than have a ‘Right Only’ footed player as left centre back.Tommy Jonsson was a great budget option from Halmstad who you could always rely on at the lower levels.

He was a little bit slow for a defender, though, so if you’re looking for a more premium option it has to be one of Kevin Hofland or Tieme Klompe. Hofland was a classy ball-playing centre-back who starts off CM life at PSV, whereas Klompe, who starts the game at Heerenveen, was more your John Terry-brick-wall-type of defender. It’s a razor-thin decision, but historically Tieme Klompe performed slightly better for me. He also has one of the coolest names ever, so that seals it. An either-footed defender (Right/Left/Centre) with Isaak’s quality is a manager’s dream. He’d seamlessly slot in to any position in the back four and perform week-in, week-out. Ideally you’d want to play him at centre back, with his Franco Baresi-esque ability to read the game and command the defence.Available for relatively cheap from Shaktar, the only issue was you wouldn’t always get a work permit at the first time of trying. Once you’d managed to sort out the paperwork, though, you’d guaranteed yourself top-level defender. His defensive stats were world-class. Another no-contest selection for the all important Defensive Midfielder slot. In the 4-1-3-2, the Defensive Midfielder (Centre)’s were never that comfortable as the DM. Even the stand-out players such as Roy Keane, Patrick Vieira or Steven Gerrard would struggle to deliver good numbers

Ibrahim Said, who was a Sweeper/Defender/Defensive Midfielder (Centre) in the game, and either footed, never had such problems. It was just the perfect role for the Egyptian who protected the defense but also controlled the tempo of the match. He was a whingy sort of player, truth be told, but he was that brilliant you’d be willing to put up with it. A bonafide legend. Kennedy could play anywhere across the front five attacking positions but he was most comfortable to the right of the midfield three. There are more talented right midfielders in the game but for about £200k from Hammerby at the start of the game, you can’t go wrong. Another Swedish maestro, Barsom is just as effective on either side of midfield. He’ll slot in on the left hand side of the legends team as his compatriot Bakircioglu is more effective on opposite flank.

Possibly the most consistent performer in the game, he was an assist machine who delivered at any level.Barsom starts Champ life at the famous Swedish team Djurgarden (Djurgarden, if anyone’s interested, is an island in central Stockholm), who were a treasure trove of bargains for CM managers scouting for talent. I picked Barsom up for £250k this time around, partly because I was Man Utd (and therefore loaded) and couldn’t be bothered to fiddle with the slider. For those willing to spend an extra few seconds selecting a custom amount you can get him for £20k to £30k. This crucial central midfield berth was the toughest choice. It came down to Tonton Zola Moukoko, Mark Kerr or regen Gazza.

Regen Gazza is easily identifiable in each game. He’d always be English (obviously), a Midfielder (Centre) either footed, and have insane attacking stats. Due to him not actually being Gazza though, It just didn’t seem right to let him in the team.

So it came down to Kerr or Moukoko. Kerr the combative midfielder that would provide solidity to the midfield, or Tonton the more attacking player who would provide flair, skill and goals. Tough decision.As it’s a coin-flip, this one has to be decided by the name. Is there a better CM name than Tonton Zola Moukoko? Unlikely. You’re in the team, son. Available for about 8 grand from Portuguese minnows Gouveia at the start of the game, To Madeira could be signed by pretty much any team. He’d take a few years to develop but it was definitely worth the wait. Madeira had blistering pace, great technique, unwavering determination and was a world-class finisher. Goal machine.

The inspiration behind this blog post, Cherno Samba is probably the biggest Championship Manager legend of them all. Starting the game as a rookie 15-year-old at Millwall, he’d be ready for top-level action inside of a year. He was like a turbo-charged To Madeira with everything you’d want in a modern-day striker; pace, power, skill, heading ability, finishing, strength. He had the lot. 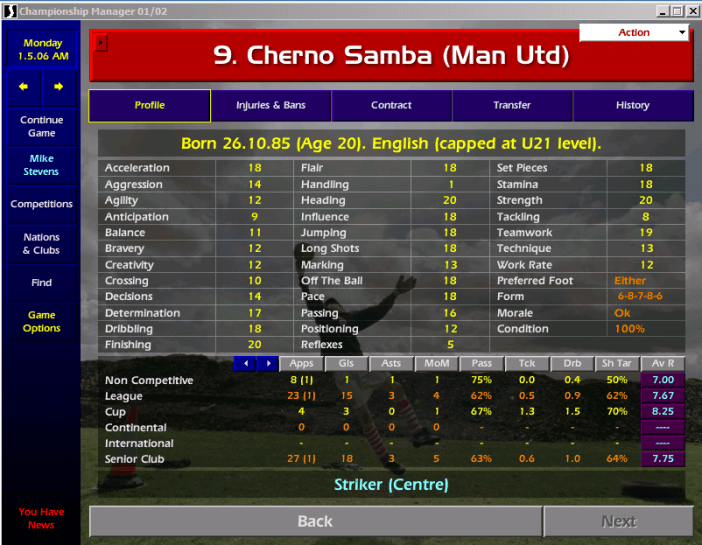 How did the legends team perform?

For old times’ sake, I managed the team for a season. I took charge for the 2006/2007 campaign (after being on holiday to begin with to give the players time to develop). As always, the legends delivered.